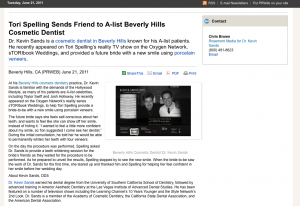 Dr. Kevin Sands is a cosmetic dentist in Beverly Hills known for his A-list patients. He recently appeared on Tori Spelling’s reality TV show on the Oxygen Network, sTORIbook Weddings, and provided a future bride with a new smile using porcelain veneers.

At his Beverly Hills cosmetic dentistry practice, Dr. Kevin Sands is familiar with the demands of the Hollywood lifestyle, as many of his patients are A-list celebrities, including Taylor Swift and Josh Holloway. He recently appeared on the Oxygen Network’s reality series sTORIbook Weddings, to help Tori Spelling provide a bride-to-be with a new smile using porcelain veneers.

The future bride says she feels self-conscious about her teeth, and wants to feel like she can show off her smile, instead of hiding it. “I wanted to feel a little more confident about my smile, so Tori suggested I come see her dentist.” During the initial consultation, he told her he would be able to permanently whiten her teeth with four veneers.

On the day the procedure was performed, Spelling asked Dr. Sands to provide a [teeth whitening] session for the bride’s friends as they waited for the procedure to be performed. As he prepared to unveil the results, Spelling stopped by to see the new smile. When the bride-to-be saw the work of Dr. Sands for the first time, she teared up and thanked him and Spelling for helping her feel confident in her smile before her wedding day.

Dr. Kevin Sands earned his dental degree from the University of Southern California School of Dentistry, followed by advanced training in Anterior Aesthetic Dentistry at the Las Vegas Institute of Advanced Dental Studies. He has been featured on a number of television shows including the Learning Channel’s 10 Years Younger and the Style Network’s 2nd Look. Dr. Sands is a member of the Academy of Cosmetic Dentistry, the California State Dental Association, and the American Dental Association.